Our family’s American history began in 1914 when Giorgio Bartolomei came to this country wanting to provide a better life for his family.  He left his wife Rosina (Landucci) Bartolomei,  daughter Gina and his two sons Daniel and Flavio back in Peigaio, Provincia Di Lucca, Italy.  His plan was to get established in America first and the 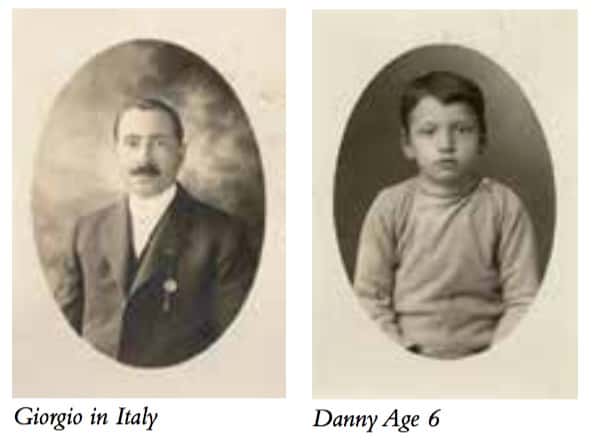 Giorgio settled in Chicago and worked for the railroad.  After spending just one year in America, life became very hard for Giorgio.  In 1915, he learned that the influenza epidemic that was sweeping through Italy had claimed the lives of his mother-in-law, aunt, daughter Gina, and his youngest son Flavio. Devastated, Giorgio knew he quickly needed to get Rosina and Daniel to America. Finally they received their travel papers and boarded a large steamer bound for America in August of 1918.

After sailing the rough seas of the Atlantic for 14 days, it was the Statue of Liberty that greeted them first.  Once they cleared customs at Ellis Island, they boarded a train to Chicago for the next two days.  Giorgio finally realized that his dream had come true when he awoke to see his son Daniel standing anxiously in the doorway of his bedroom.

Six months after reuniting with his family, Giorgio decided it was time to leave Chicago, and he moved his wife and son to Worcester, Massachusetts. Over the years, Giorgio and Rosina taught their son all their family recipes, and in 1938 they opened a restaurant together and called it Danny’s Spaghetti Shop. It was located on Grafton Street.

In 1949, Danny decided to move to Cape Cod with his wife Carmela and five children: Dan Jr., George, Johnnie, Marvin and Paularose. He opened Danny-Kay's Pizzeria on Main Street in Buzzards Bay. 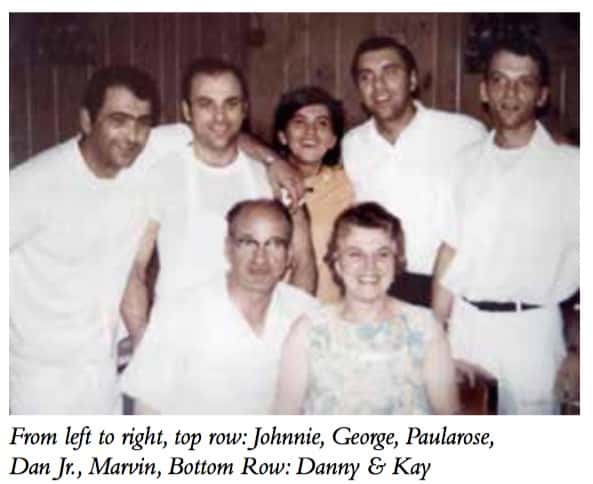 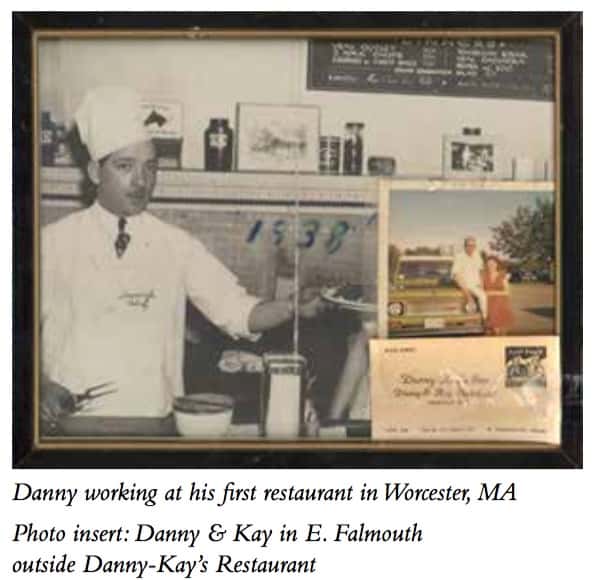 In 1958, Danny-Kay's Pizzeria moved to Main Street in East Falmouth.Then in 1959, just a few blocks away, Danny and Carmela opened the legendary Danny-Kay's Italian Restaurant. For the next 18 years residents and visitors of Falmouth enjoyed Italian Cuisine like no other. Danny and Carmela retired in 1977 when they sold their restaurant. People still to this day rave about dining at Danny-Kay's. 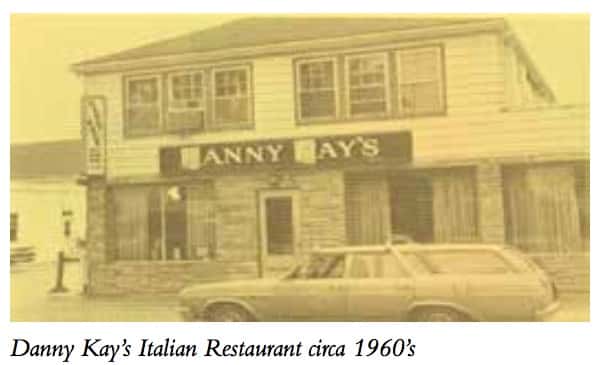 In 1969, Danny's son John with his wife Celina opened Johnnie's Diner at the Otis Rotary in Pocasset featuring the family's recipes. Johnnie served breakfast, lunch and dinner and was open 24 hours a day. In the early 1980's, Johnnie moved his business to Falmouth and purchased the Shady Nook Restaurant just off Main Street at the end of Academy Lane and opened Johnnie's Italian Restaurant.

Impressively, Danny and Carmela celebrated their 70th wedding Anniversary at Villaggio in September 2005. Danny at the age of 94 passed away on March 31st, 2006, ending Villaggio’s first anniversary. Carmela, missing her husband, followed him just over two months later on June 12th, 2006. She was 92 years old.

After six years at 188 Main street, Villaggio just became too small of a location.With only four years left on the lease and a high rent, it was time for a change.

Jay was approached by the owner of the Falmouth Inn who loved dining at Villaggio so much he decided to make Jay an offer he could not refuse.With a larger dining room, separate cocktail lounge, function hall in a 123-room hotel and a much more affordable rent, the decision was easy.

With a brand new start, Jay felt he should be respectful of his family's Italian culinary heritage and change the restaurant name from Villaggio to his paternal great-grandmother's maiden name ..."Landucci".

Looks like 2014 will be taking us to a third location in Cotuit.  Having to relocate due to the hotel being sold,  Jay will be reviving the Crocker House recently known as the Regatta Restaurant.  Built in the 1700’s the home has been used in many ways, but it was Brantz and Wendy Bryan who opened the famed Regatta making the move from Falmouth to Cotuit.  Ironically Brance and Wendy had their first date at Danny Kay’s Italian Res-taurant, so it seems only fitting that our journey should also takes us from Falmouth to Cotuit.  Villaggio at the Regatta, merging both upscale restaurants together seems to be the perfect solution and a win, win for all.

Here we are in 2020, it has been a very turbulent year with the widespread of the Corona Virus literally shutting down the country coast to coast, Jay decides to take a trip out to Del Mar, California.  While spending a few days on the beach in Del Mar Jay stumbles across a mostly outdoor restaurant bearing a for lease sign, his curiosity turns quickly into a purchase and Villaggio Ristorante at Del Mar opens on October 23rd 2020, right in the middle of a world wide pandemic. Jay’s oldest son Anthony periodically would switch places and cook at Villaggio California when Jay would travel back to check on Villaggio Cape Cod and Jay’s youngest son Nikolas moved out to work at Villaggio as well. Within 1-year Villaggio takes First Place in not only, “Best New Restaurant”, but also “Best Italian Restaurant” in North County San Diego. Amazingly Jay meets quite a few guests who have dined at both his Cape Cod and California Villaggio’s. However, with all his success the restaurant above Villaggio, The Beeside Restaurant makes a great offer to purchase and Jay accepts. Making people happy with food is Jay’s passion and it was nice to be able to do it coast to coast.